The Emotional Impact of Brexit

Change is an emotional process. Any change whether personal, organisational or indeed constitutional is likely to feed into our hopes, dreams, anxieties or fears. The extent to which change can be an emotional process is particularly apparent when we are not in control of the change process. So it is for over 48% of the UK population including 62% of the Scottish population after the vote to leave the EU last Thursday.

The nature of the emotional impact of change has been characterised by Kübler-Ross in her Grief Cycle which was originally established to reflect the nature of the grieving process. There have been many versions of the original Grief Cycle created since. One such version is listed below for reference: 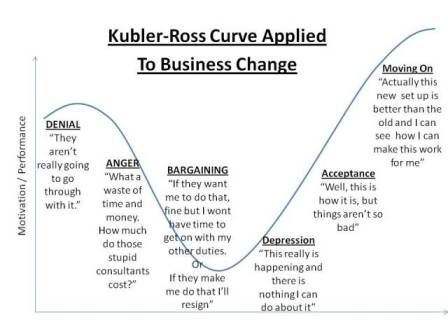 Later research by many organisational behaviour and change management academics has linked this process to the emotional impact of organisational change. We can also see how, over the last few days, this Grief Cycle reflects many of the emotions that have been felt by the electorate and how this can help explain (admittedly to a small extent) the events that have happened since.

There’s really nothing I can do.

OK, it really is happening. There’s no point whining about it anymore – we’ve just got to get on with it.

There may be opportunities here. Let’s work with others to make the most of things.

It is best not to make significant decisions immediately following and in response to any significant change event. Those who have remained fairly silent over the weekend have undoubtedly done the right thing in taking time to reflect and analyse the situation before making any major steps. It is important that the electorate and markets are given every possible reassurance and that they are supported through this emotional process. All the announcements so far from the UK Government have rightly been about stability and reassurance.

It is important to recognise that this is an emotional process. That’s not to say that all that has happened, and all that will happen, can be explained by the Grief Cycle. That would be far too simplistic. All I would argue is that it provides part of a wider picture of what is happening right now – and that it is an important part of the picture that should be recognised in moving forward.

What is needed now is strong but emotionally intelligent leadership. The transitions cannot be rushed. But the sooner that the electorate, and our elected representatives, accept the new reality and begin to move on the better.

This site uses Akismet to reduce spam. Learn how your comment data is processed.